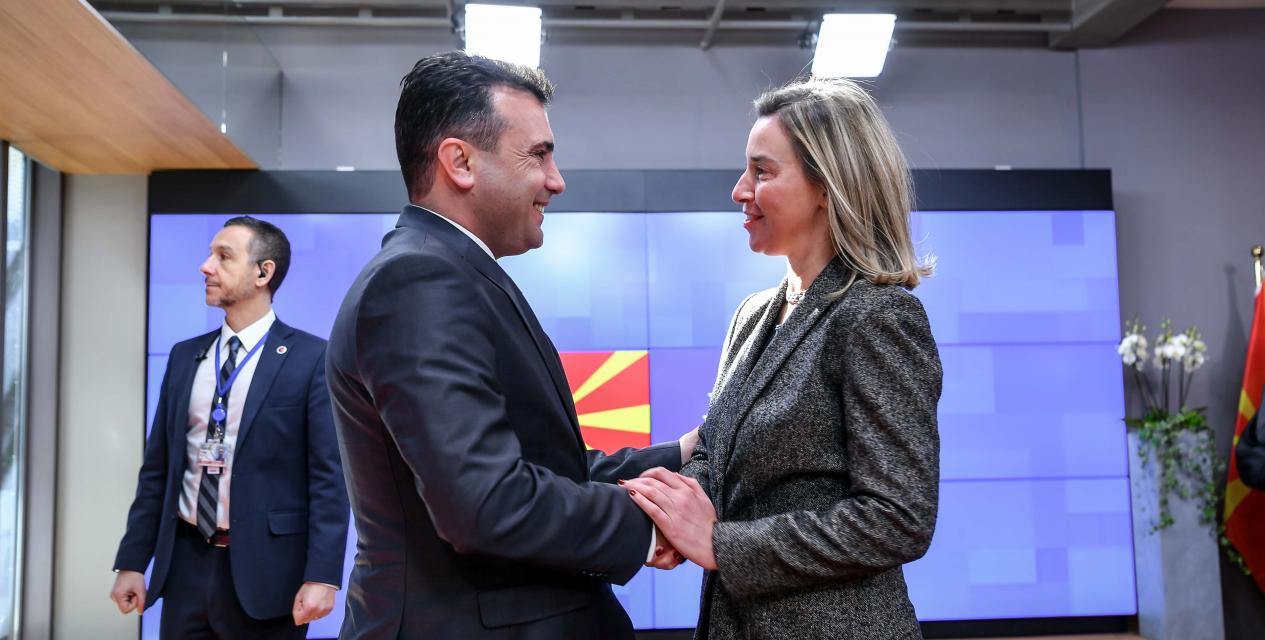 In North Macedonia there is a joke: “There are two absolute things – God and the USA, but the USA comes first.” But what about the EU? Together with Croatia, North Macedonia was the first country in the Western Balkan region to step up cooperation with the EU through a so-called Stabilisation and Association Agreement almost 20 years ago. Whereas Croatia joined the union in 2013, North Macedonia is still in the waiting room. This is despite being an official EU candidate since 14 years and the European Commission having already recommended open accession negotiations with the country 10 times. We argue that it is now time to be fair and admit that North Macedonia has done its best to cross all obstacles. The EU should lock in the reforms by allowing accession negotiations to start, and thereby reposition itself as credible partner to North Macedonia and the region.

In the past decade, EU talks with North Macedonia have been continuously overshadowed by the reluctance of the EU Member States, especially Greece, to give a green light to the opening of accession negotiations. Greece and Macedonia solved their bilateral issues in June 2018 through the Prespa agreement, resulting in the country changing its name to North Macedonia. It was expected that this would spur the EU Member States to open the door for opening accession negotiations during the crucial European Council meeting in June 2019.[1]

The opposite proved to be the case. Formally due to the German Bundestag needing more time for its assessments, the decision was postponed to October. For the Netherlands, the argument to keep North Macedonia in the waiting room again was the uncertain future of North Macedonia’s special prosecutor’s office (SPO). Dutch Parliament specifically asked the Dutch government in June to make opening accession negotiations with North Macedonia conditional upon the adoption of a law that would make the SPO a permanent body. We believe this approach is problematic.

“Pressure on the adoption of the SPO law favours speed over quality and works against the EU’s objectives of sustainable rule of law reform.”

Such pressure on the adoption of the SPO law favours speed over quality and works against the EU’s objectives of sustainable rule of law reform. That is because the Macedonian opposition now stalls the negotiations in order to escape indictment for its own past wrongdoings. As such, time pressure empowers the opposition to demand compromises in respecting the rule of law and implicitly concessions to impunity in ongoing cases on past power abuses.[2]

Amidst this difficult quest to end the political bargains over institutionalisation of the SPO and the future of the cases it currently handles, the “Еxtortion” scandal involving the chief special prosecutor of the SPO has further diminished the credibility of the institution. If there is however one thing this scandal proves, it is that political party involvement in the selection of prosecutors, as was the case with the prosecutor now in custody, is a mistake and should not be repeated. Rushing the adoption of the SPO law before October 2019 would undermine the ultimate goal of an independent prosecution. There is no alternative to the principles of the rule of law, which can only be attained sustainably in a deliberate process, and not through a political deal.

“The Netherlands and other EU Member States should bear in mind that short-time agendas for big changes in tackling high level corruption are hardly realistic.”

The Netherlands and other EU Member States should bear in mind that short-time agendas for big changes in tackling high level corruption are hardly realistic.[3] What counts is that the current government is serious about reforms, pro-European and ambitious. During its mandate, North Macedonia has reached a certain track record in establishing accountability for past wrongdoings.   High level officials have been sentenced for involvement with the violent attacks on the Macedonian Parliament in 2017. The former Prime Minister, Minister of the Interior and the Director of the Bureau for Security and Counterintelligence have among others been convicted over power abuses, and the SPO has so far handled 18 indictments on high level corruption. As Prime Minister Zaev said, the “Extortion” case is “an example of the totally changed environment [in North Macedonia] in pursuit of high-profile corruption and organised crime.”[4]

Regarding the SPO, no law being adopted may be more favourable to the longer term process of rule of law reform than the rushed adoption of a law which politicises the prosecution for high level corruption cases. What is most important for now is that the continuity of the cases currently handled by the SPO is safeguarded. This can be done by passing those cases to the regular public prosecutor. Without the burden of time pressure, the country can then deliberately decide on the future institutionalisation of the SPO under close scrutiny of the EU.

Recent analysis moreover shows that in comparison to other countries of the region, North Macedonia is best rated in the implementation of the rule of law reforms as required by the EU.[5] As for the level of preparedness, North Macedonia does not lag behind countries that have already been allowed to start accession negotiations such as Montenegro and Serbia and in some areas (e.g. economic criteria), it stands even better.[6] Being an early starter in the process, North Macedonia does have the advantage of early legislative transposition and as such, longer periods of implementation.[7]

“The vicious circle of EU Member State requests for preparatory reforms has to end.”

The vicious circle of EU Member State requests for preparatory reforms has to end. Opening EU accession negotiations has the potential to be the game-changer in undertaking deep reforms and the time for North Macedonia is now. It is no secret that the impetus for the Prespa agreement came from the perspective of opening accession negotiations. Prespa’s implementation is complex and linked with opening the negotiations. The agreement is an example of a major political sacrifice that sometimes needs to be made to revive the often troubled relations between the countries of the region. Its effect on the Belgrade-Pristina dialogue between Serbia and Kosovo should therefore not be underestimated. North Macedonia is among the very few positive examples in the EU’s direct vicinity in the past few years and should be used to shy away potential external influences and threats brought by the vacuum of the failure to integrate it in the EU. Not locking in current momentum will only favour the return of nationalist rhetoric and anti-Western narrative already looming in the country.

Opening accession negations is just the beginning of a long and bumpy road which does not directly lead to EU membership. The stakes are simply too high for the European Council to take a negative decision in October.

[1] The decision is  first made in the General Affairs Council, and conclusions  are subsequently endorsed by the European Council. See: https://www.consilium.europa.eu/en/press/press-releases/2019/06/18/council-conclusions-on-enlargement-and-stabilisation-and-association-process/

The blog was originally published on Clingendael